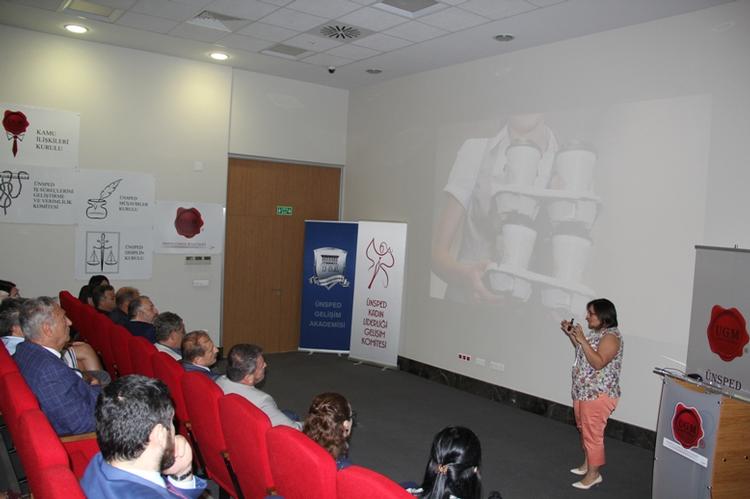 Our guess for the seminar that war carried out under the leadership of Women Leadership Development Committee, within the scope of UGA Noon Talks, in ÜnspedGümrükMüşavirliği Headquarters MHÜ Conference Hall on 20 September 2016 Tuesday was Ms. Tülin Akın the President of Association for Improving Agricultural Awareness, nominated for Nobel Prize in 2014 vy JCI and ICC-WCF, received the prize of 2012 Development of Agricultural Trade from Turkish Agriculturist Association, Making Difference Prize from Sabancı Foundation, 2013 JCI - TOYP 10 Successful Youth of the World Entrepreneur prize, 2013 International Social Influence Prize from Anita Borg Institute - 2013 The Female Social Entrepreneur of the Year prize from Garanti - KAGİDER and also the mother of 2.

In the seminar themed "Can you be a Social Entrepreneur?", Ms. Tülin Akın told, based on her own life story, that she achieved success with determination, ambition and resolve, by not losing hope against the negative events and searching for analytical ways, that success and failure can be always together in the business life, what matters is to get over the challenging situations with an analytical approach.

Ms. Tülin Akın who highlighted that happiness is not a place but it is something that is inside the person, stated that she thinks the essence of life and the future of humanity is in technological agriculture and added that if women took place in the business world actively, became entrepreneurs, open to improvement and innovative thinking, work with determination and approach to problems with analytical and different point of views, the success would come. At the end of the seminar which was carried out as Q&A in an interactive way, our Founding President Mr. Haluk Ündeğer presented the plaque to MS. Tülin Akın.