We have participate in the panel titled New Opportunities in the new period, Izmir as the city of Free Zone 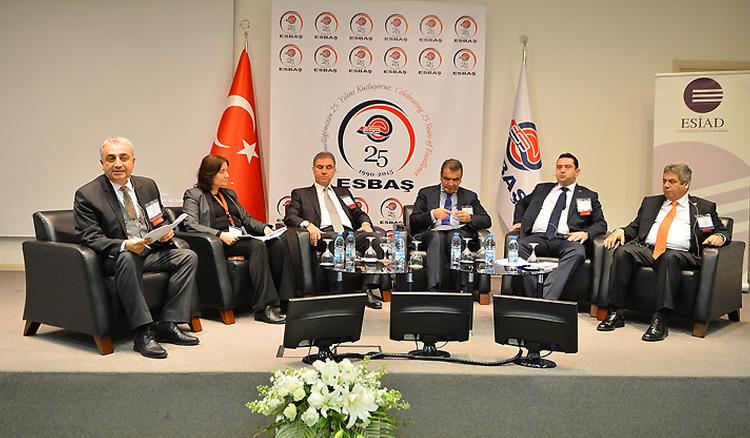 We have participate in the panel titled "New Opportunities in the new period, Izmir as the city of Free Zone" organized by the Aegean Industrialists' and Businessmen's Association (ESİAD). In the panel where the event held at the Conference Hall of ESBAS Technology Center on Monday, February 2 has been participated by a wide range of people from Izmir and the region, opening speeches are performed by ESİAD Chairman of the Board Mustafa Güclü,Aegean Region Chamber of Industry Vice President H. Ibrahim Gökçüoğlu and İzmir Metropolitan Municipality Mayor Aziz Kocaoglu, respectively.

In the panel after the opening speech, CihanTürsen) Izmir the City of Free Zone Chairman of the Committee), ZübeydeSolak (Ministry of Economy, Free Zones General Directorate of Foreign Investment and Services Head of Department), EyüpSevimli (IZBAS Chairman of the Board), BilgenSalihNarlı (Aegean Free Zone President of the Association of Industrialists and Businessmen) and Dr. FarukGüler (ESBAS CEO) took part as a guest speaker under the moderatorship of Prof. Dr. NevzatSaygılıoğlu.

Presentations on many subjects vital to the Free Zone such as positioning Izmir as the city of Free Zone,what is expected from the Free Zone, Free Zone Legislation in Turkey, the new Free Zones vision of the Ministry and place of Izmir in this vision were made in the panel, opinions were presented. Our Board of Directors Vice President Mustafa Sağdıçand IlkerSarıbaş, the Regional Director of Izmir have participated in the panel.