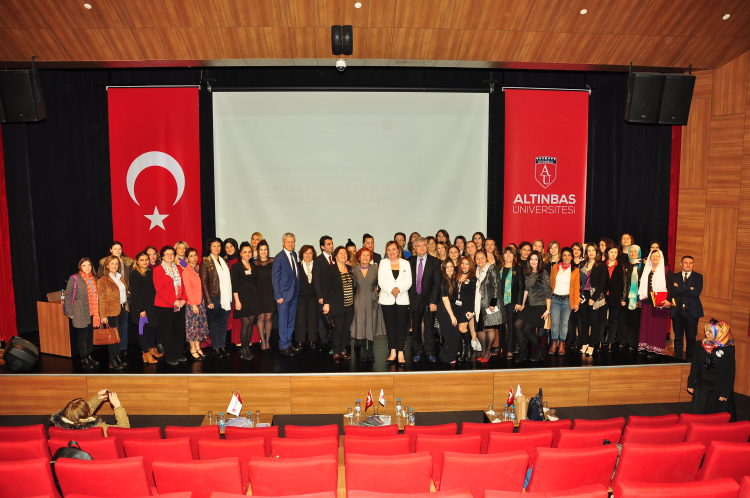 With the activity titled “Business People under the Woman’s Leadership”, organized in cooperation of Ünsped Customs Consultancy and  Logistics Services Inc. and Altınbaş University, the success stories of women in business life, the projects and studies that they created from scratch were handled.

Within the scope of March 8 International Women’s Day Activities by Ünsped Woman Leadership Development Committee made up of the woman personnel working within the structure of Ünsped Customs Brokerage and Logistics Services Inc., we came together  in the panel titled “Business People under Woman Leadership” on March 07, 2018 Wednesday in Fatma Altınbaş Conference Hall in coordination of Altınbaş University&Social Gender Equality and Woman Studies Research and Application Center (TOKAMER).

Women Coming together from Different Segments of the Society, who are our Future

In the first session of the panel that was made up of three sessions, the topic “Business People” was handled. In the panel in which Asst. Prof. Fatoş Altınbaş, a faculty member of Altınbaş University and a member of TOKAMER Consultative Committee, was the moderator, MCD Medya Lifetime Turkey Chairman, Bozatlı Holding Member of the Board of Directors Zeynep Nili Boyatlı Bakır, Zen Pırlanta Member of the Board of Directors Şükran Güzeliş, TOBB Member of the Woman Entrepreneurs Board, Malkan Makine Assistant General Director Mutlu Alkan Kütüklüoğlu, Fashion Designer, founder of www.purplation.com Evrim Timur were from among the speakers.

And in our final session, the topic “the Women Creating from Scratch” was handled. In the panel in which the session chairman was AÜ TOKAMER Chairman Zeynep Banu Dalaman, Kars Boğatepe Village Environment and Living Society’s Co-Chairman Zümran Ömür, Bursa Saitabat Village Woman Mutual Aid Society’s Chairman Sermin Çakalı, Edirne Woman Solidarity Society’s chairman Sahide Ağaoğlu, Arife Korkaz from Mudanya Kumyaka Village Woman Development ad Continuity Society, Leyla Şeker from Bursa Trilye District Agricultural Development Cooperative were from among the speakers. At the end of the panel, Ms. Fazilet Patır said: “In lieu of the mentality of “Men Establish a State; whereas the Women a Family”, woman employment in public and private sector is a condition primarily in angel investment and entrepreneurship and we do not oppose positive and negative discrimination and will be in solidarity for womanization of employment and positive globalization and will continue to work in this regard.”

At between 17:00 and 18:00, Awards for Awareness in Social Gender Equality, organized in cooperation of UGM Woman Leadership Development Committee and TOKAMER and being a novelty in Turkey, found their winners. They were presented to TUSIAD Chairman Erol Bilecik since he turned the word “businessman” to “business person” and emphasized  gender equality, to Actor, UN Goodwill Ambassador Mert Fırat since he emphasized woman in development with the title of UN Development Project Goodwill Ambassador of Turkey, to Journalist Ayşe Arman because of her interviews on violence to woman, to Journalist Gülden Aydın because of her series of articles on war territories, refugee women and violence to women, to Judge Süleyman Mutlu because of his exemplary decision on child abuse in the case of Teacher Saadet, to Canan Güllü, the Chairman of Women Societies Federation of Turkey because of her studies on social gender equality in civil society and prevention of violence to woman, to Assoc. Prof. Dr. Neva Çiftçioğlu because of being the first foreigner obtaining the title of associate professorship in Finland, being a woman science person finding the germ responsible for calcification and called nanobacteria and receiving invitations, awards from all over the world on account of this discovery of hers and besides because of being the first Turkish Science Woman working in NASA (American Space and Aeronautics Administration) for 2,5 years, to Sümeyye Erdoğan Bayraktar and Assoc. Prof. Dr. E. Sare Aydın Yılmaz because of founding the Society of Woman and Democracy, organizing and putting the topic of women’s rights on the agenda by way of meetings, seminars and conferences and raising an awareness on this matter all over Turkey and finally to a faculty member in METU Prof. Dr. Yıldız Ecevit because of her woman studies.

Our activity came to an end with taking of an altogether photo of the participants.