The Article of Our Company Consultant Sami Altınkaya Entitled "The German Production Giant Is Growing Its Investments in Turkey was published in Dünya Newspaper on 31.01.2022

We should not consider Germany's investment in Turkey, which is an example of the world in production, as just an inflow of capital. The production culture and technology that comes with it are important for Turkey to produce more value-added products. Since the German discipline and quality of production are accepted in the world, it is necessary to evaluate the investments of German capital in Turkey differently in order for our industry to be affected by this.

The Krone family, which has been producing for four generations since 1906, has been engaged in industrialization for 115 years. Industrialism, which started with agriculture and agro-based industry based on large areas of land located in the North-Western region of Germany, has managed to become one of the two largest brands in Europe today.

The production culture of the family stands out in this success. The fact that the lands and facilities it owns are given to the management of talented family members without being allowed to be divided among family members has made growth continuous. With the management strategy made by protecting the rights of all members of the family, it has managed to survive for more than a century.

Turkey is the only country where Krone has invested abroad, including one in the Netherlands, where most of its investments are in Germany. Krone, which has about 6 thousand employees worldwide, manufactures trailers in Izmir Tire.

We talked about investments with Rıza Akgün, CEO of Krone Turkey. Akgün said that: "German-based Krone is among the biggest companies in its sector with a turnover of 2.2 billion Euros. We established our facility in Tire in order to penetrate both to the Turkish market and to new target markets. While the Turkish economy was going through its most difficult days, Krone continued to trust and invest in Turkey. Currently, we are selling 50 percent to the domestic market and 50 percent to the foreign market. We export to 27 countries. We import half of the products we produce. Due to the geopolitical and logistical advantages of Turkey, we wanted to grow in Turkey. Turkey has become almost Krone's new gateway to the world. There have been new markets that we have discovered from Turkey. We started doing business with countries such as Saudi Arabia, Israel, Hungary, Poland and Tanzania. We have entered the South Korean market again through Turkey. We have a partner in South Korea. We are making significant achievements in order for our brand to become a world brand. We want to open up to the Turkish Republics and send our products to the interior regions of Africa. Turkish market is already a big market for commercial vehicles in its own. While we produced 2,500 units before the pandemic period, we closed the year in 2021 with 4,800 units. In 2022, we have adjusted our capacity to 6 thousand. The markets have revived, and newly developed products have also been transferred from Germany to Turkey 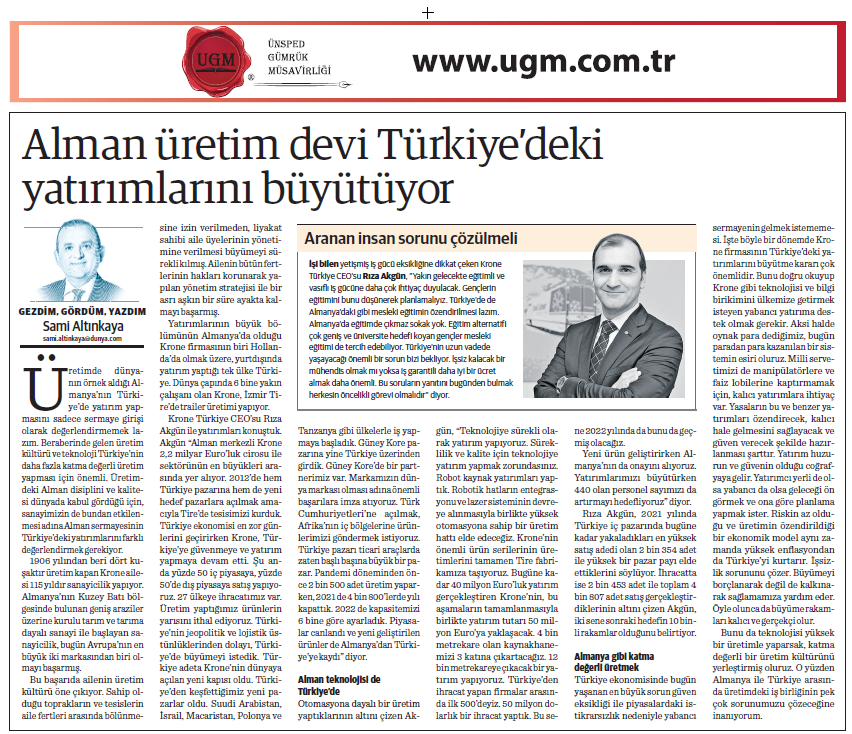