When I was doing program at BloombergHT, my guest Prof. Dr. Mithat Melen spoke about mediocracy in live broadcasting. It was then that I understood better why Turkey should solve its education problem. Mithat Hoca tolds that the reason for Atatürk's war against ignorance was mediocracy. He said mediocracy would be destroyed by a well-educated society. I once again realized how true Atatürk's phrase “if one day my words contradict science, choose science” was. Mediocracy is the name of our biggest problem. This concept describes those who know everything but are not doesn’t know single thing truthfully and correctly. It's the opposite of merit. The mediocre don't like the skilled persons. Because for them, the greatest danger is competent hands and working minds.

So, why are mediocre people so loved and preferred?

It is because they do what they're told without questioning. Such person is not a man of duty; he's a man of command. He is blindly loyal. They don't think about the consequences of what they do. For them, the greatest inheritance they will leave is money. They don't have a last name to leave with dignity and pride. And the generation grown by the mediocre is like them. They are assigned to the head of companies and institutions. People who like to rule alone take mediocre names with them. Because they don't want their mediocracy to be disclosed. They see smart ones danger for themselves. They get their power from the seat where they sit. Once the seat's gone, they remain completely lonely.

Skilled managers solve problems. Mediocre managers, on the other hand, do not know how to solve problems, but solve the problem that they create themselves.

They also do not hire people who produce projects, criticize, and bring new solutions, because they consider such persons as competitors for them in future. Or they don't employ them in jobs where they can demonstrate their performance. The result is inefficiency and failure.

Result; unmanageable crises and hands in the air

Those who do their job well, called job for who knows it and sword for who uses it, are not put in charge of the job. In fact, their success is prevented by all sorts of intrigues. The best thing mediocre do is to know how to eliminate dangers with footy games. Their minds always work on frauds.

In the end, the people win the battle between the mediocre and the skilled is the skilled one. But this long and arduous war is a great waste of time for society. And the children of both segments pay the price for years.

This disease, which we see in every part of society, must be dealt with urgently. If we want to keep growth and development going, we have to give the job to the skilled people. A person's well-being should be evaluated in direct proportion to the quality of his work. You may be doing your job well today. You may have added value to the company for many years. But if you can't renew yourself, don't occupy those seats anymore.

Today we live in a world where not the big and strong wins, but the one who is fast, fit and agile wins. Those who can't keep up with it should leave their place to those who are fast and agile. I'm not talking about young people; I'm talking about young, fast and agile minds. That's the main criterion. We are in an era where brains that are constantly refreshed, projects that are renewed with technology and those who work with the sweat of the mind are winning.

Managers appreciating the innovative thoughts of teammates, their solution suggestions, always taking the best with them and see them as company insurance will remain in their seats. Those who cannot build their cadres with this truly movement have no chance of standing and surviving. I already announce the fact.

We can beat all kinds of viruses with technology

Those who work the sweat of the mind not only survive. They also show the success of standing upright. In the digital era, wars are no longer just about guns. Weapons are used in backward, low-level societies, such as the Middle East. And for developing countries, technological weapons are used. No matter what you call genetics, micro-biology, threat that sits on a scientific basis is at the top of the agenda. COVID-19 is just one of them, and it won't be the last. So, is passive resistance to this threat and hiding a solution? Should we stop production and decommission life?

In any case, what is desired is to hide and disable our immune system and destroy it. Instead, it is necessary to use science as a means of defense and shoot the virus with its own weapon.

While chatting with Tezmaksan General Manager Hakan Aydoğdu, the low death rates in Germany, Japan and South Korea in the COVID-19 outbreak were raised. "This is not just the result of good health systems. It is also closely related to its investments in robotic manufacturing, automation and remote tracking systems. Having a system and model that protects people in times of crisis, but also ensures the continuation of production, can minimize the extent of the tragedy that you experience,” he said.

Aydoğdu continued “we are in a period where one of the countries that are forced to continue production in Turkey is very valuable and the remote service lifeguard” and said that “we opened maintenance and service we gave to our own customers for many years, now to the industrialists of all production sectors in Turkey. We have a strong technological infrastructure and engineering background. In this process, we quickly switched to a home-to-work system. In this, the impact of the investments we have made in our technological infrastructure for many years has been great.” It became clear that investing in technology was not in vain, as the epidemic that came at a moment when we never expected it forced us to work from home. To respond to customer demands, we need a strong technological infrastructure and staff to use it.

COVID-19 showed how important all these applications that help make production remotely are. Aydoğdu, who reminded that people have to go to workplaces and factories in order for production in Turkey to continue at the moment, emphasizes that the low death rates in Germany, Japan and Korea are not only with the good health system or with measures taken, but also with investments in robotic production, automation and remote tracking systems in these countries.

"Robot use will increase”

Aydoğdu, who pointed out that having a system and model that protects people and keeps production going in the crisis area can minimize the extent of the tragedy, says that the use of robots will increase and new professions will emerge. Aydoğdu emphasizing that according to research by Oxford Economics, rapidly rising robot use in the manufacturing sector will cause 14 million people to be unemployed in China alone says that “since 2000, 1.7 million people in the United States; Europe and China have lost their jobs with the increase in robot use. With COVID-19, robot use will increase. Another 200 million people are said to lose their jobs. In order to prevent this, people who can use robots, program them, develop and design software solutions will be needed. It is essential that we transform our production infrastructure and human quality with a fast and systematic program. The biggest mistake would be to ignore it.” 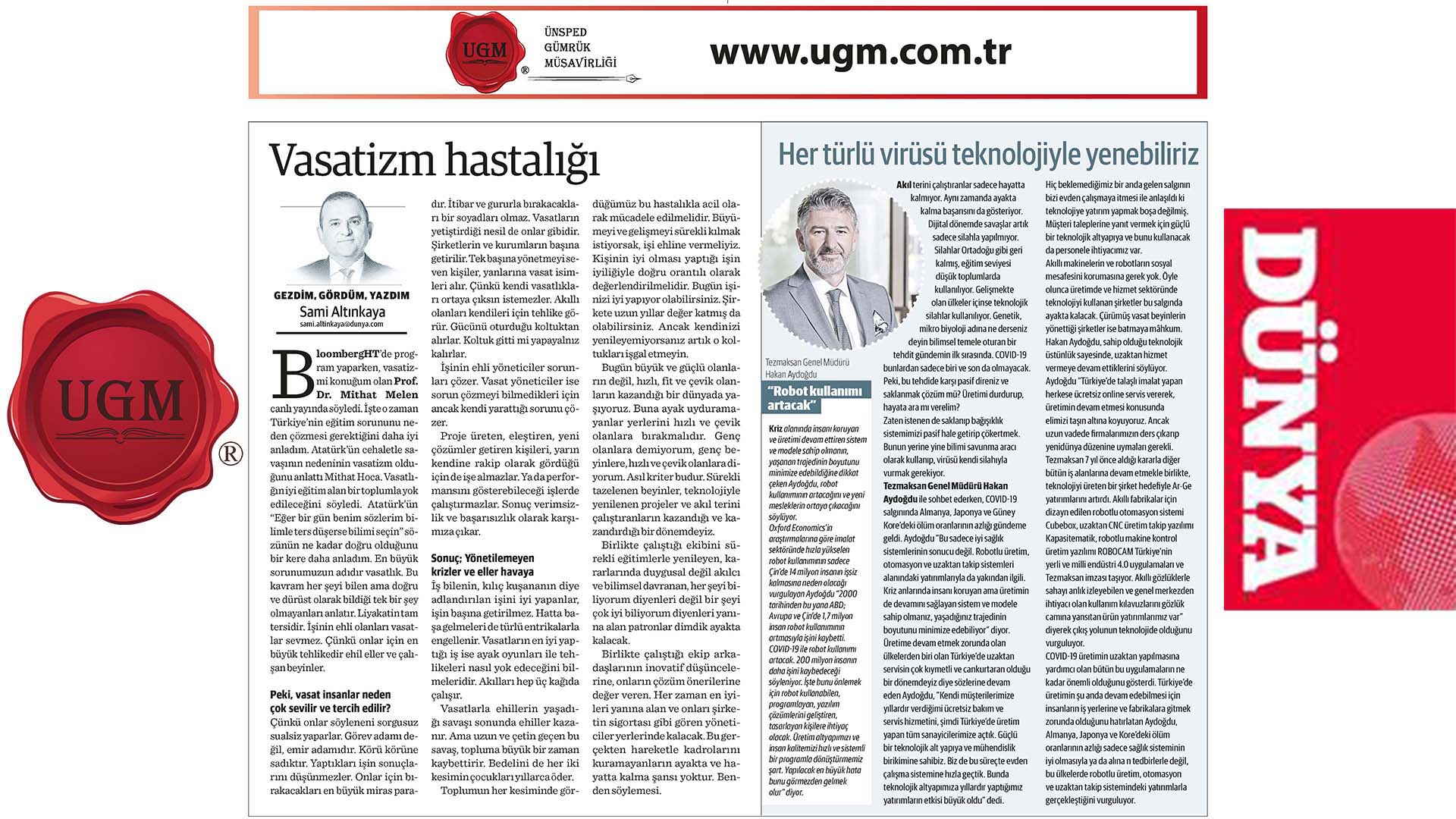