Our UGM Corporate Communications Director Sami Altınkaya's article entitled "It is required to read ISO 500 correctly" was published in Dünya newspaper on 20.07.2020.

Istanbul Chamber of Industry (ISO) announces the ranking of 500 major companies in Turkey every year since 1968. In the economic world, we chatted over our coffee at the weekend with Celalettin Güleryüz, who wrote his articles with nickname “Nam-ı Değer Ahmet Bey", whose name has been mentioned frequently recently.

Before starting to evaluate the 2019 ISO 500 list, Unsped Customs Brokerage CFO Güleryüz reminded conditions of 2019 for Turkey and the world economies and specified that “2019 was a period of increasing protectionism in trade all over the world, the US-China trade wars were one of the most important developments threatening World Trade. Brexit and US-Iran tensions were also a few of the key issues on the agenda throughout the year. As a matter of fact, economic growth in the world in 2019 was 2.9 percent, the lowest in the last 10 years.

Nam-ı değer Ahmet bey, also draws attention to the exchange rate crisis. "In the same period, on the Turkish side, a currency crisis and high inflation are just beginning to be eliminated, and it was a period when the stones in the markets have not yet been fully seated, and expectations were dominated by unease. Again, it is necessary to consider the local elections on March 31 and the impact of the election atmosphere on the economy. Of course, in this environment, our economy was able to grow by 0.9% due to reasons such as increases in the costs of enterprises and decreases in demand in their foreign markets.”

In this environment, ISO announced the ranking of the top 500 major companies. Celalettin Güleryüz said that: “We can say that the performance of ISO 500 companies in 2019 is realized as a period in which financial problems continue in parallel with these developments and both cost height and low demand for growth are struggled. In 2019, ISO 500 companies exceeded the limit of TL 1 trillion TL in sales from production; they earned 1 trillion 21 billion 869 million TL sales revenue from production. It was an increase of 16.4 per cent compared to the previous period. In this increase, of course, the effect of the exchange rate increase is a known fact. One of the issues that caught my attention most is that operating profit fell by 14.6 percent, although turnover increased. This indicates that businesses are unable to reflect their increased costs on their selling prices, so their cost structures are deteriorating. It is a manageable problem in the short term but not sustainable in the long term. Therefore, it is one of the few most important issues in the 2019 list.”

Another of the most important considerations is the high level of financing expenses, which have been a heavy burden on enterprises for many years and reached up to 89 percent of operating profit in 2018. Celalettin Güleryüz is making math talk again. “Although it has decreased slightly compared to the previous year in 2019, financing expenses still take about 70 percent of the operating profit of the enterprises. Perhaps more serious is that financing costs for the last 2 years have been higher than the profit of enterprises before tax. In other words, companies are forced to allocate more money to financing expenses than the money left to them after deducting all elements of costs and expenses except tax. This situation also contains serious medium-and long-term danger elements. In 2017, the profit before interest and depreciation ratio of the profit before the end of the period before tax obtained by ISO 500 companies was 56 percent, while last year and this year this rate was 47 percent and 45 percent respectively.”

In other words, companies have allocated 44 units of 100-unit profit as interest and depreciation as a result of their activities, and in 2019 they have now allocated 55 units. Looking at the details, it is clear that the reason is due to increased financing costs, that is, to put it more clearly, loan interest.

Celalettin Güleryüz for a long time holding on the pulse of citizen Ahmed Bey said that: “174,4 billion TL financial liabilities that have risen in the last 5 years to 406,3 billion TL, i.e. 133 per cent increase and increase in indebtedness ratio (debt/equity) from percent 60,1 to h.4 indicates that ISO 500 companies are unable to pay their debts with earnings and they can close their existing debts only with new debts” and highlights another truth.

Celalettin Güleryüz said that: "One of the issues that can be considered positive in the ISO 500 company ranking is R & D expenditures, which increased by 152 percent compared to the previous year, and the share of medium-high and high technology in value added created for the first time exceeded 30 percent. Of course, the share of low and medium low technology still stands at 70 percent. But in order for these developments on the R & D side to become meaningful, we need to see an increase in our share of high-tech products in exports and therefore an increase in the export kg unit price. Otherwise, , it will come across as a cost, not a benefit.”

The man who wrote The Book of Brokerage

I wanted to share with you an important work that Sedat Kocabıyık, who works as a customs broker in the Aegean Regional Office of Unsped customs brokerage, has brought to the sector. It is reputable when foreign trade is carried out according to rules. The rules do not change, but there is a constant change in practice in accordance with the requirements of the era. Sedat Kocabıyık also wrote a work of academic value to guide young people who will become brokers at the age of 29. I wanted to share this book full of knowledge with young minds interested in foreign trade. 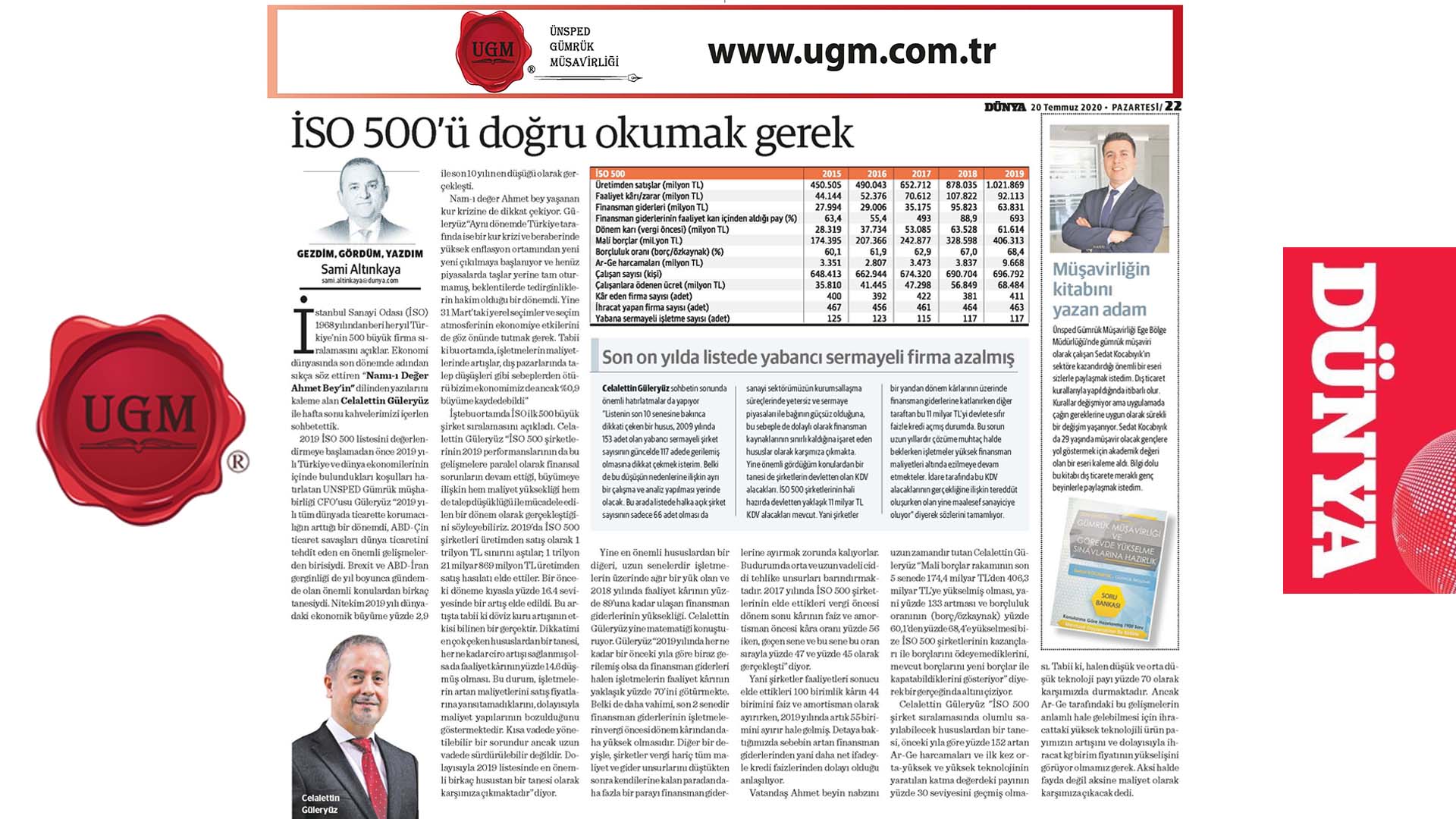