The forgotten player of foreign trade

Foreign trade is a team business, a national team. The managers of the team choose their players carefully. While the economic struggle in international markets is breaking down, every player of the team has a special importance. As a result, you will wave your flag and announce the name of your country to the world.

Firms in Turkey also need the support of the team's managers to sell their products and services to the world with their own brands. As a result of this support, the economy of Turkey wins. Our country grows and develops.

Our President Recep Tayyip Erdoğan announced the measures to relieve the players of the export team during this difficult period in Turkey. Every sector that regarded the state as a father was curiously waiting for this package of measures, which we believe would be the lifeblood of the economy. The state has come to aid of the sectors that produce and are in a difficult situation. It implemented many measures, from postponing debts to one year to re-funding.

The logistics and transportation sector also took its place in the economic measure package. The active players of the foreign trade team consist of transporters, those giving warehouse services, cargo companies, port operators, agents and those providing customs consultancy services.

The state forgot a player while giving foreign trade team players lifeblood to prevent their slowdown against corona virus and to support them. A single sentence was not disclosed for companies providing customs consultancy, which allowed the foreign trade team to hit the strikers with golden shot. It is not known whether the state and the leader of the team, President Erdoğan left this to the technical committee, but the players are curiously waiting for the details of the package.

The customs sector, which follows the state as the children listen to their fathers in crisis, is waiting for good news for them. When it is calculated that there is a labor-intensive business line in the field it serves, customs clearance services make a significant contribution to the country's employment.

Think about it, a product will be produced, it will be a carrier, and foreign trade of this product will be carried out. If these transactions cannot be made, how will your property go abroad? Or how will raw materials enter the country?

There was even a ministry for customs clearance and trade in the past. As I emphasized at the beginning, this is a team game. All players must be strong. The state should treat the players of the team equally, and make them feel its compassionate arms at rainy days, without separating them from each other.

Those making money with mind effort

The way out of Turkey is possible by manufacturing factories that build factories, machinery producing machines. If you add to this the companies that not only uses technology but also manufacture it, no one can stand before you.

Machines that produce every product from white goods to automotive you use today are also made in a factory. It is important that these patterns are domestic and national. We call these machine tools. At that time, you can perform the production you want in the defense industry or in the space industry.

Foreign companies producing machines imported from abroad sign an agreement with us. We cannot manufacture in the defense and space industry with the machines we have purchased. There is more. The machines sold to us are not the latest technology. It is not the newest and the top. If desired, the foreign company may not even send the spare parts of the machine. This is addiction.

Ahmet Özkayan, General Manager of Ermaksan, producing in Bursa, says that to succeed, it is necessary to read and understand the world very well. Emphasizing that knowing English very well is the only way, Özkayan believes that only then can we bring the technology abroad to Turkey. Ninety engineers work in the Ermaksan R&D center. Then you can create your own information technology. Saying that the bosses should be setting targets, Özkayan said, “We understand the need. If useful, we project. We do not deal with any projects that we will not take in serial production or commercialize. We don't say let's take advantage of this incentive. Our R&D is important for this. ”

Remember, in the past, millions of money were distributed in good faith for innovative production. If these coins do not return to Turkey as added value, it makes no sense. The important thing is the technology will be produced in Turkey and the products produced with this technology will be exported. Incentives also need to be done in a way that supports the domestic producer.

Sheet metal processing machines are produced on the machine side of Ermaksan. In the R&D center, laser welding, diodes, sensors, software embedded systems, CNC machines are produced from semiconductors. Özkayan said, “The difference from the machine is that the machines consist of tons of iron. Technology is placed on it. Our aim in establishing our R&D center was to produce the technology that we depend on abroad. We succeeded here. Now we give the technologies of all devices produced by Ermaksan ”

Even though indirectly, technology exporting is started. This is good news for Turkey. The dream of Ahmet Özkayan is to export million dollars with one envelope. In that envelope, there will be totally mind effort and technology.

Smart machines are produced in Ermaksan

Özkayan said, “Turkey has not produced smart intermediate products in the past time. There have been no companies to produce. We had to import. We have become good practitioners as companies. We have become an integrator. Our application engineering has developed well. We imported these machines with imports. But our rate of locality, which was 90 percent 30 years ago, was reversed. It remained at 30 percent. The job turned to import at the rate of 70 percent. ”

Now, with these rates, you cannot be indigenous and national. This is an external dependency. Turkey should also produce intermediate products itself. If we produce smart machines, we get rid of addiction. With the aim of advanced technology and added value, our industrialist should produce his own technology as in Ermaksan. I'm talking about a 90 percent technologically independent Turkish company. The size of a country is measured by the size of the manufacturing industry. Therefore, we say that the way out of inflation, economic crises and growth goes through production. Countries that have high technology, use and produce it will develop and grow. 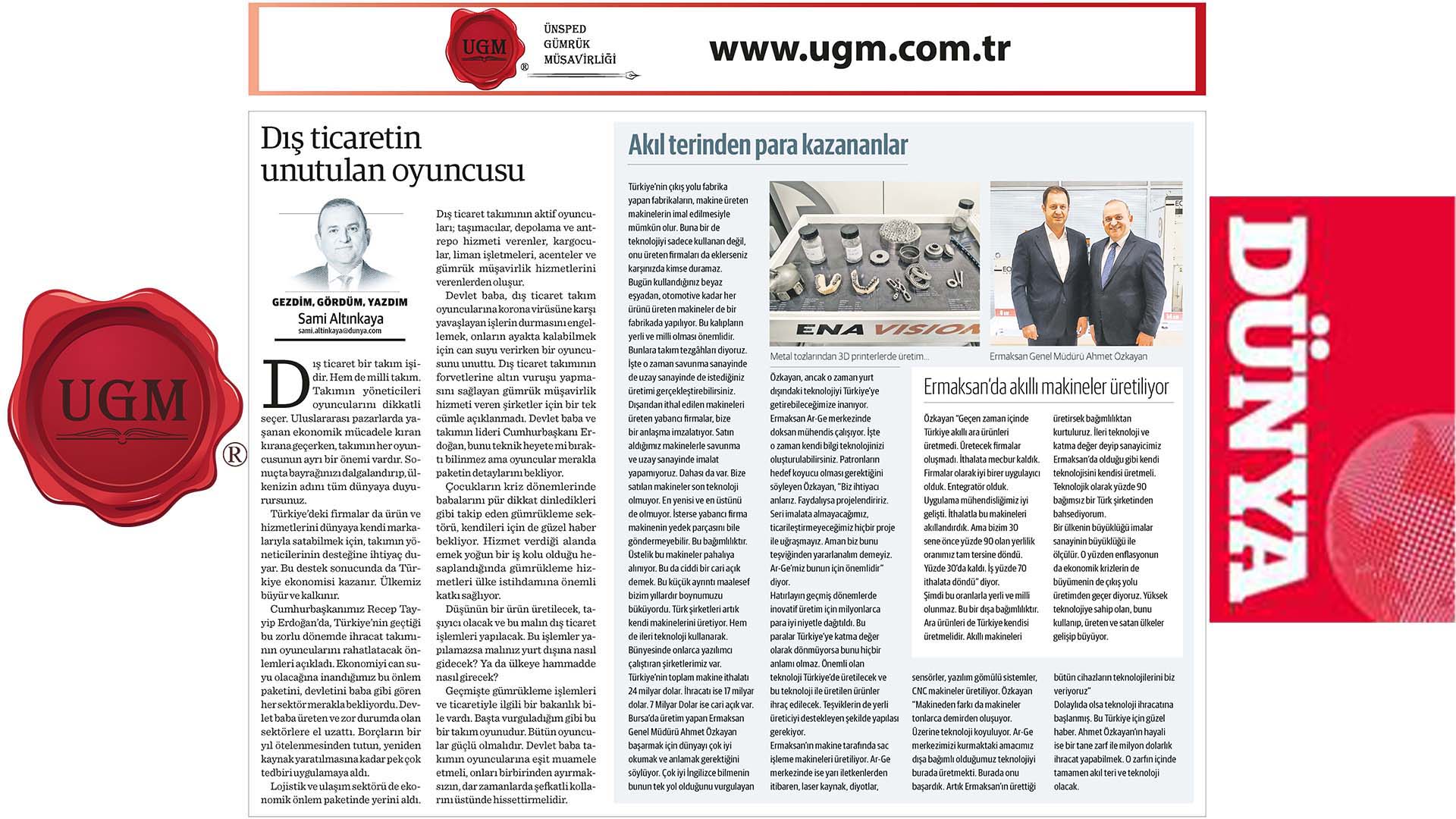