The fact that the mental sweat created by a Turkish entrepreneur is worth $ 1.8 billion in the world is the proof of this.

Mersin comes out of the crisis with innovation, R&D, digitalization and e-commerce

It was in the early 2000s. Ayhan Kızıltan, President of Mersin's Chamber of Commerce and Industry, who first used the word innovation in Turkey, continues on the same line and resolutely to get out of the crises. We talked with Ayhan President about the pandemic process and how the producers manage the crisis. Speaking without hesitation, Ayhan President emphasizes that 2020 is the year of solidarity for Mersin.

- We did not anticipate that the virus will affect the economy of Turkey so much. We had set goals according to this. What is the latest situation at the point we have reached in Mersin now?

Our 2020 target as Mersin business world; primarily to ensure the sustainability of employment, which is the basis of social peace, and production, which is the pillar of our economy. It is to ensure that economic actors have their feet firmly on the ground and that they stand strong by protecting what exists. As Mersin Chamber of Commerce and Industry, we are always on the field. In this regard, we have seen the great benefit of our communication with the field very well, determining the needs of the field directly through dialogue with the needy, and communicating this to the top management, TOBB and government officials. We are delighted that many of our suggestions are included in the precautionary packages and that our business world is listened to. Many supports have been announced. There were those we could reach, those we could not reach or benefit from. But somehow, as Mersin, we managed to keep the economic structure alive together.

- What kind of measures did business people take in Mersin?

Mersin business world tried to use the support provided by the state, such as SSI and tax delays, as much as possible. But there was some difficulty in reaching the loans. Considering the registry, many companies could not reach their credit support. Especially in private banks, this problem was experienced a lot. The good news is that there were not many layoffs in Mersin. Everyone made great sacrifices in this regard, using their own resources. For this reason, Mersin business world sees 2020 as a year of solidarity.

To strengthen the equity capital of SMEs; The primary target was to strengthen their equity capital, develop their production and increase their trade with new partnership structures. We try to bring producers, SMEs and those with capital together and motivate these partnerships. The state also needs to support and encourage this issue. This will strengthen the capital structure and equity structure of SMEs and break the dependency on bank loans. In order to survive in an increasingly competitive environment, we have to learn the culture of partnership in order to become long-term SMEs.

During this period, the way of trade changed. E-commerce took the lead. After that, it will gain speed. It must be our production so that we can market it and do e-commerce. Especially important in the agricultural sector, let's set and package our products in a way that will make e-commerce. The manufacturer should work on it. One of the goals should be to strengthen this pillar. In other words, integrating R&D, innovation, information technologies into the economy and using new business forms; In other words, digitalization will be one of the issues we need to focus on in this process.

Another vital issue is of course agriculture. During the pandemic period, the whole world understood that agriculture is the first priority sector. The goal should be to increase agricultural production by increasing the population engaged in agriculture. For this, returning projects to agriculture and rural areas are extremely important. Recently, there have been negative effects of climate change on the agricultural economy. We, as MTSO, attach importance to this issue in order to increase agricultural production. To this end, we are planning a center that will be the first in the US under the name of “Climate Change Adaptation Center” in cooperation with the Agricultural Food Technopark and Provincial Directorate of Meteorology.

In addition, there are some investments that we need to complete in order to further develop the economy of our city and our region. Completing these investments at the end of 2021 is among our biggest goals. What are these investments; Çukurova Regional Airport, Çeşmeli-Taşucu Highway, a second main road parallel to D-400 between Mersin and Tarsus, and the new Mersin Main Container Port. The completion of these investments will have a great positive effect on the trade of both Mersin and Çukurova Region and the cities and countries in their hinterland.

Now a new normalization process is starting not only in health but also in trade. We say new normalization, we say everything will change. Of course, not in this word, we also have plans and thoughts about these changes. We now think that local dynamics should be included in the initiation, planning, decision-making and finalization processes of investments in the regions. There is a news that an investment will be made in any city. A fight begins in the city, is this facility held here? It harms the environment, there are reactions as to whether this land is agricultural land here. We say that Turkey should now move on to the investment plan and planned development. First, it should plan the regions according to their geographical conditions, geopolitical situations, underground and aboveground resources, logistics possibilities, soil structure and climate, and local dynamics should be included in the planning process from the beginning to the decision and finalization processes. If this happens, needed investments will emerge that are suitable for that city, region and that the public will not digest. This will contribute to efficiency.

-What support do you expect from the state to solve the unemployment problem?

In order to solve the unemployment problem, all payments such as taxes and withholding related to employment during the pandemic process must be deleted, it is very important for businesses to survive and maintain employment. In addition to being deleted, the tax burden on employment should also be reduced in the upcoming period. In addition, employing qualified personnel such as engineers and technical staff by manufacturing companies should be made attractive and encouraged with stronger supports. In this way, both production quality will increase and it will be important in terms of production planning. 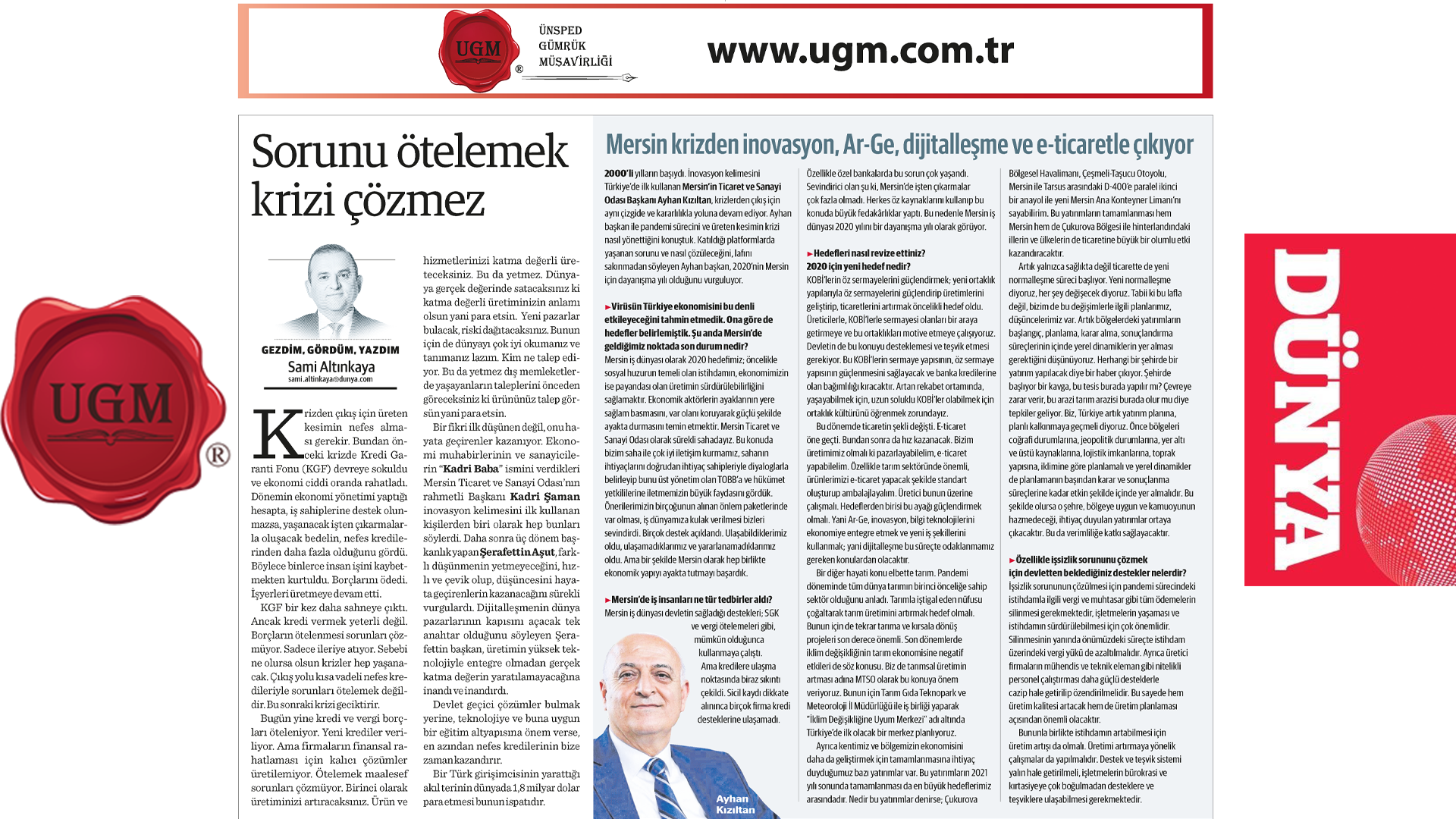