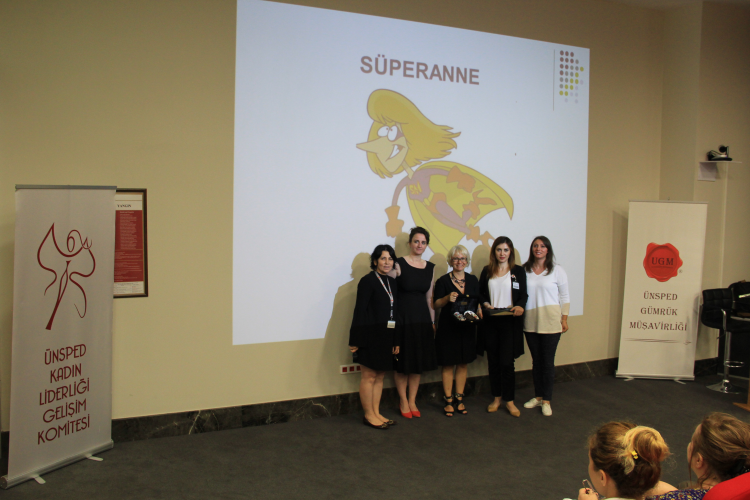 In the pioneering of Ünsped WomanLeadership Development Committee and in the scope of Enlightenment Meetings,İstanbul Altınbaş University Psychology Department Chairman and ChildUniversity Coordinator Assistant Prof. Ms. Aylin İlden KOÇKAR became our guest inorder to discuss the subject of "Child Training of the Mother in CareerJourney'' on the date of 16 August 2017 Wednesday between 12:30-13:30 o'clockin UGM, MHÜ Conference Salon. By indicating that the first affiliationrelationship between the mother and the baby is established before the birth,in her presentation named ''To Be the Mother in Our Day'', she underlined that mother-babyrelationship shall be the basis in the safe affiliation of the baby and in thedevelopment of baby's sentimental sufficiency which shall continue life-long.

Ms. Koçkar started to her words bysaying that motherhood and fatherhood is a full-time job, however the duty isleft to the mother in the situations of the country and just like in theprinciple of ''We Do Not Make Discrimination Between Our Employees'' takingplace in our Policy Book, she stated that mother and father are two separatehuman beings under the same institution and separate messages must not go tothe child from mother and father in the training of the child.

By mentioning the importance ofestablishing safe relationship between mother and child, by also emphasizingthat the first one year is the most valuable years, she said that the importantthing is who looks correctly and concerned, additionally mother and father mustbe the persons who give primary care to the child because all attention of thechild is directed to the person who meets the needs of the child.

Sha has emphasized that a differenttrust relationship develops between primary affiliation person and the baby andwhen the basic confidence is formed, baby starts to count upon the otherpersons as well, secure children can be separated from their mothers withoutcrying and their exploration behaviors develop.

Ms. Koçkar indicated that motherhoodmust be balanced and mother must give her love, attention and game time to thechildren. There is the need to play game with the children for 25 minutes everyday and she has mentioned the importance of playing game by asking the questionin the way of “This is your private time, what do you like to play today?” andby giving attention to the game, mother must leave the leadership to child.

By emphasizing that children do not knowhow to direct their feelings and there is the requirement for the mothers toteach the children how to manage their feelings and calming the child issomething can be done with the person who is in healthy confidence relationship;and she has indicated that the only need of the children is having the feelingof they are understood by their mothers and fathers.

By saying that children need peerstarting from 2 years of age in order to have the development of children'scognitive characteristics; she emphasized that natural tendencies of thepersons who give care, their education and experiences and at the same timebeing able to establish healthy relationship with the mother are important. Shealso stated that mothers and fathers must behave like the main team but notlike the support team.

Plaque of Ms. Aylin Koçkar was presented by the Members of Woman LeadershipDevelopment Committee and the meeting ended by taking family photograph.