Our company consultant Sami Altınkaya's article entitled "Let's not repeat the same mistake..." was published in the Dünya newspaper on 04.01.2021.

I want to draw your attention once again to free trade agreements. I need to remind our Trade Minister, Ruhsar Pekcan, and her team how previous practices have captured our economy. As a result of the agreement with South Korea, there is a serious problem for products originating in South Korea to enter Turkey duty-free from other countries in the Far East.

In the same way, it was a duty to emphasize that the Free Trade Agreement signed with Egypt came to equal terms with Turkey at the end of 20 years, by which time there was trade in favor of Egypt. Moreover, I am not even saying the documents and waiting times that the Egyptian Chamber of Commerce and industry wants from Turkish companies. These practices, which make domestic production difficult, should be reconsidered, so that plus points will be written on the scorecards of experts working at the Ministry of trade.

Free trade agreements are good, but their rules are fully established and contribute to the economy if equal conditions are formed for both countries. The origin of imported goods is well controlled.

The Free Trade Agreement signed between Turkey and the United Kingdom, which has been heralded in recent days and available on the economic agenda, should not end in frustration in the same way. In agricultural products and other sectors that Turkey has difficulty exporting to the EU, it is important to implement them in a way that adds added value to our export. Although it is not produced in the UK, it is necessary to pay attention to products that will come from other countries originating in the UK, which is the largest producer in the world, not to harm our domestic producer.

The balance of foreign trade, which is currently in Turkey's favor, should not turn against us with unplanned and unscheduled political mistakes. He wanted to draw attention to this issue. 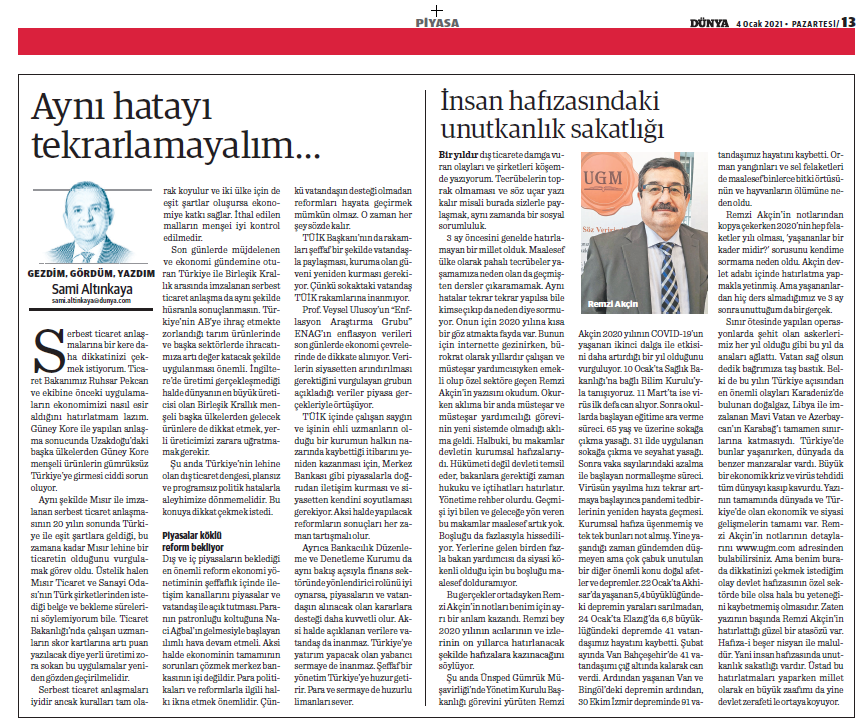