On Ekonomitube TV, I hosted Durmuş Yılmaz, who served at the Central Bank between 2006 and 2011. Yılmaz stood at the head of the Central Bank of the Republic of Turkey during the American-based world crisis in 2008. We're having another crisis. High inflation, dollarization and uncertainty in exchange rates, external dependence on production and rising industrial inflation. Of course, the unstoppable food inflation.

Why has the Turkish economy become like this? While we focused on the concrete-based production model, we could not concentrate on manufacturing-based production. Our high-tech production and exports are at three percent, and we have not been able to digitize production in the industry. External dependence on raw materials and intermediate products unfortunately increased industrial inflation to over 30 per cent. As such, increased production costs were reflected in product prices in the market. Because we cannot develop alternative energy sources, especially in energy, the cost of production in industry has increased.

As if that wasn't enough, foreign trade became expensive. High costs at ports cause us to lose both time and money. Our economy loses $ 4 billion every year because of invented chameleon expenses such as delivery order and cargo delivery certificates.

In such an environment, the most important warning made by the former boss of money is that the Central Bank administration must transparently tell the public what was done before. He also wants the minus reserve to be accounted for. He admonishes the central bank and the economic administration to be patient. If they think the dollar is no longer rising and they rush then the dollar will rise again.

Durmuş Yılmaz emphasizes that the central bank receives its authority from the Parliament and that the only institution it will hold to account is the National Assembly. "The Central Bank should be independent. He just thanks the government for putting him in this position. And he only gives the account to Parliament. A bank that is outside the control of the Court of Accounts under normal circumstances should be audited by the Court of Accounts today. The current money markets board also served during the time of the previous chairman. This board must also account for the melting of reserves,” he says.

Yılmaz said that the reason why the citizen's foreign exchange accounts in banks increased from 28 percent to 56 percent is because the citizen does not trust his national currency, and he says that the public's trust can be restored with transparent management.

Yılmaz, who noted that Naci Ağbal will find support if he tells policies to all segments of society, emphasizes that communication will be an important medicine, and a Central Bank administration in transparency will also give confidence abroad.

After that, the main issue is economic management. We say that Lütfü Elvan should meet with the Ministers of Agriculture, Trade and Industry and work to increase production and facilitate trade. This issue is too important to be left only on the shoulders of Naci Ağbal. The minister of justice must be on this team and convince the citizen and then investors around the world about the rule of law in Turkey.

Durmuş Yılmaz says that if the expected major reform is fully implemented, Turkey's minus reserves can only go to plus after 5 years.

Yılmaz, who stressed that the economy is a team job, said that: “The management system is at the heart of the problems. Problems can be solved with an accountable transparent administration.”

The former president, who said he had made the mistake of his life by entering politics, regretfully expressed that he had no contribution other than to enter routine meetings at this time.

It is another issue that should be considered if a name that has given his years to his work and is experienced in this way completes his words. Unfortunately, the political institution has ceased to be an end and has become a means. Experience also fades away. 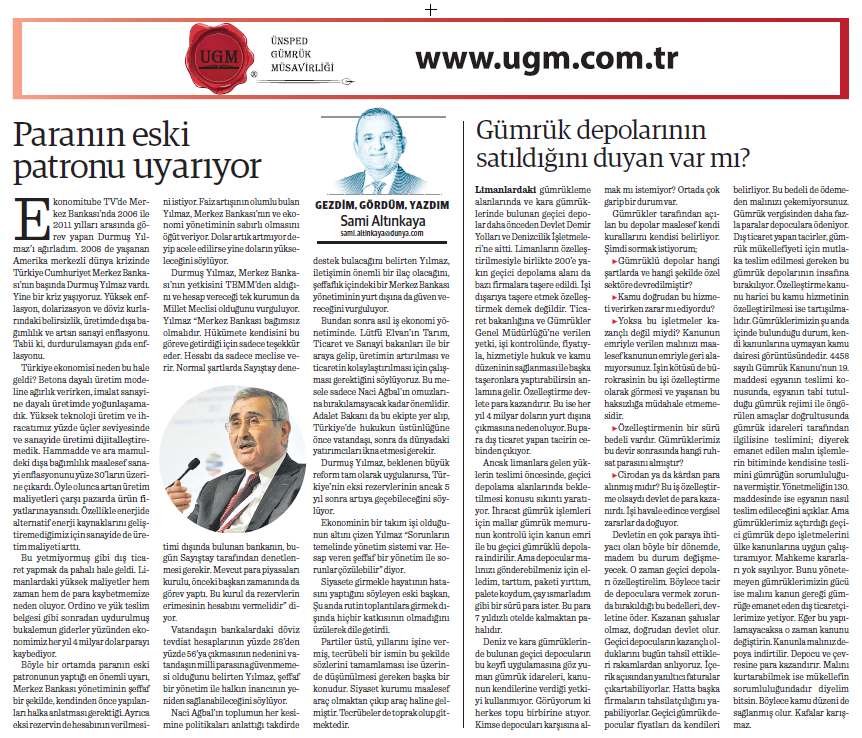