Our company consultant Sami Altınkaya's article entitled" Ethics and reputation" was published in Dünya newspaper on 08.02.2021.

Don't these two words look good when they are next to each other?

Ethical values are a set of values that are unwritten and represent good ethics in it, which belong to a world where the word is a deed, as emphasized by Tezmaksan Chairman Mustafa Aydogdu.

At a time when even contracts are ignored, I am happy that there are those who believe that the word is deed.

Reputation is a concept that cannot be bought with money. Companies don't make money every year. Think like a rubber ball, it goes down and out. One year you can make a profit, the next you can make a loss. But reputation is like a crystal ball. Once you drop it from your hand, it breaks and you can never put it together. So never drop that crystal ball from your hand. Lost reputation cannot be regained.

In a society, only those who have ethical values are respected.

So, when did we start losing these values?

After the 1980s, unfortunately, after the unfortunate statement of the late Turgut Ozal, “my officer knows his job”, bribery spread to all segments of society, as if it was a normal thing.

And it wasn't sufficient. Unfortunately, mediocre and unemployed people were appointed head of institutions without seeking merit. That was the biggest blow to ethics.

Imagine in which developed country in the world the complete “education is a must” can be chewing gum in a comedian's mouth. This is exactly why education-related associations were established in Turkey. This dynamite and corruption laid at the foundation of society is being tried to be eliminated through associations.

Associations are born of a need. As such, many years later, the establishment of an association called the Ethics and Reputation Association in Turkey became mandatory. So there was such a need that such an association was established in Turkey in good faith.

In order to increase ethical values in society and emphasize the importance of the concept of reputation, these and similar associations should first organize their own understanding of management and projects in order to settle a Turkey where the word is deed and merit dominates the country. Otherwise, it continues to be a signage association and remains a center for show where name of a few people with money is social responsibility. It is important to adopt these values first and then spread them to society.

It is necessary to be consistent in it to do long-term, reputable work such as educational volunteers, associations to support contemporary life, and to be permanent. 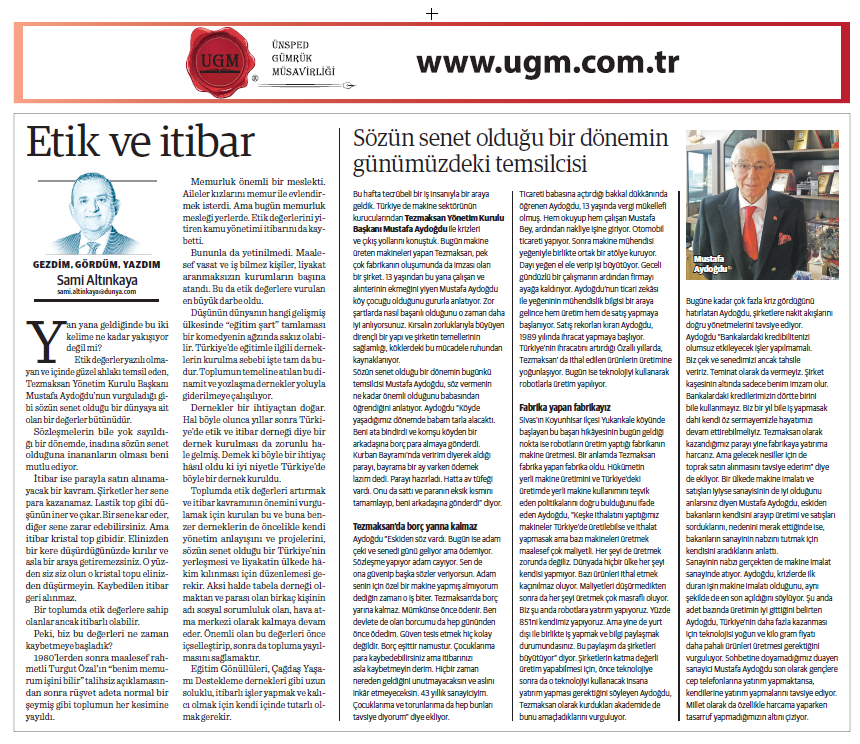